Why you’ll want to drive one too

There is an electric car at the end of our street, which we see charging every couple of days as we walk past to the corner store or down to the beach. The set-up isn’t sophisticated, the power cord, which plugs into the side of the car while it’s parked on the street, is strung up along the ceiling to a hidden powerpoint in the eaves of the old-shop-front terrace house. My daughters point it out every time we walk past and we talk about how cool it is that someone near us owns an electric car that we can see charging in plain sight.

On our weekly trip to swimming lessons, whilst searching for a park, electric vehicles always come up in conversation, because right next to the disabled parking spot, in prime parking position, is a space allocated for electric vehicles – or EVs – complete with a public charging station.

Like many Australians, the idea of driving an electric car has huge appeal to me, and yet the concept still seems so out of reach. So when I was offered the chance to test drive Nissan’s latest EV, the Leaf e+ for a week I couldn’t have been more thrilled. I booked more face-to-face meetings which would require taking the car, and planned a girl’s weekend at Pearl Beach, within the 380km battery range, to top the week off. 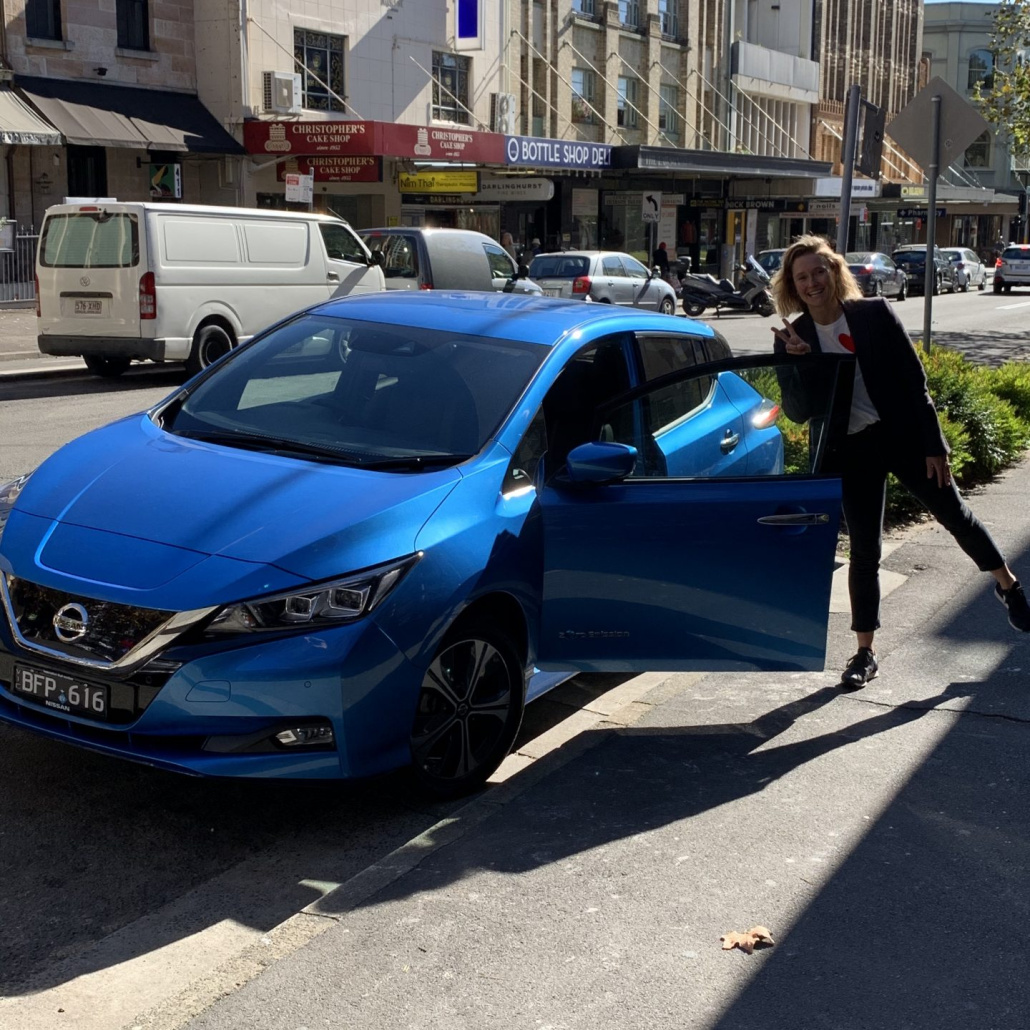 I don’t know who is more excited to pick up the car, the kids or me. With two car seats in the back and my eldest in the front, I’m prepared for the space to feel cramped (it’s a small hatchback after all), but it feels just as spacious as our medium sized SUV. Due to the aforementioned excitement, the kids, who usually fight over which seat they are going to sit in, while demanding they absolutely cannot do up their own seatbelt, miraculously buckle themselves in, in record time.

We activate the B Mode regenerative braking – which is strange at first – it negates the need to use the break. By taking your foot off the accelerator it signals to the car you want to break, whilst using the kinetic energy to recharge the battery. It takes a few learner driver style bunny hops before I get the hang of it.

Before your eyes start to glaze over, stay with me, the fact that technology exists to power a small car for up to 385km should be celebrated. What also should be celebrated is the addition of bio-connectivity. Which means any unused charge in the car can be plugged back into the grid, and in addition, the car can be used as a power source itself. 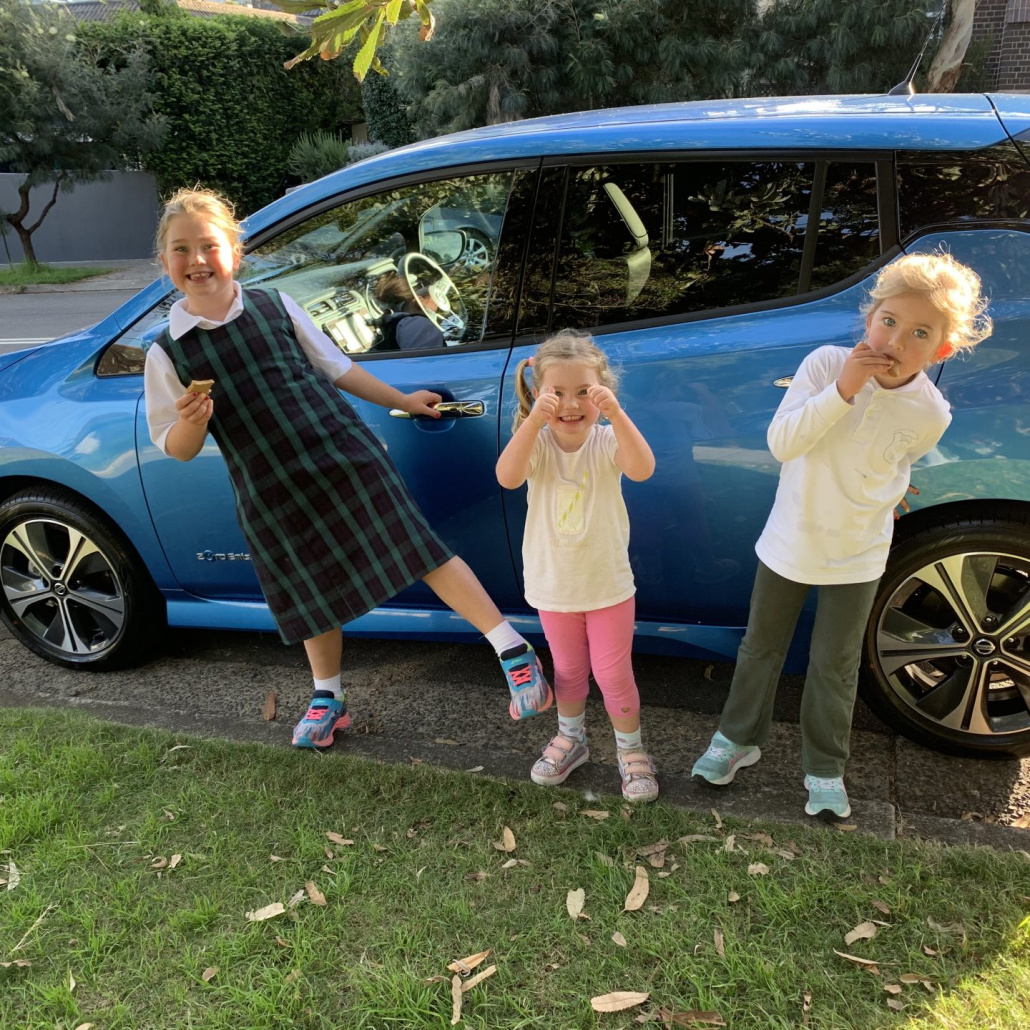 An electric car gets the thumbs up by its smallest passengers

We don’t drive far on day one, the battery, which displays on the dashboard in a similar spot to where you look for the fuel gauge, is still at 96 per cent. By morning though it has dropped to 86 per cent, so it’s probably best to plug in each night anyway.

We have a powerpoint in the ceiling of our carport, which when we moved in we saw as quirky, but now seems very convenient indeed.

Securing prime parking position at swimming lessons is a highlight of the week. We arrive in our usual rush and park in the space allocated for EVs. Naively I plug the charging cord into the public charging station assuming it’s free. It turns out there is an app that needs to be downloaded, credit card details entered, parking location selected and then charging can begin.

We are away from the car for about an hour and a half, and on our return the battery charge has only increased by 20 per cent. Another factor I hadn’t considered is the length of time it takes to charge. It’s not like pulling into the petrol station and filling up in a couple of minutes.

There are high-speed public charging stations, which you can locate using the charger finder map in the car, however I didn’t end up finding one as I found plugging into the regular powerpoint in the carport each night recharged the battery to 100 per cent by the next morning. 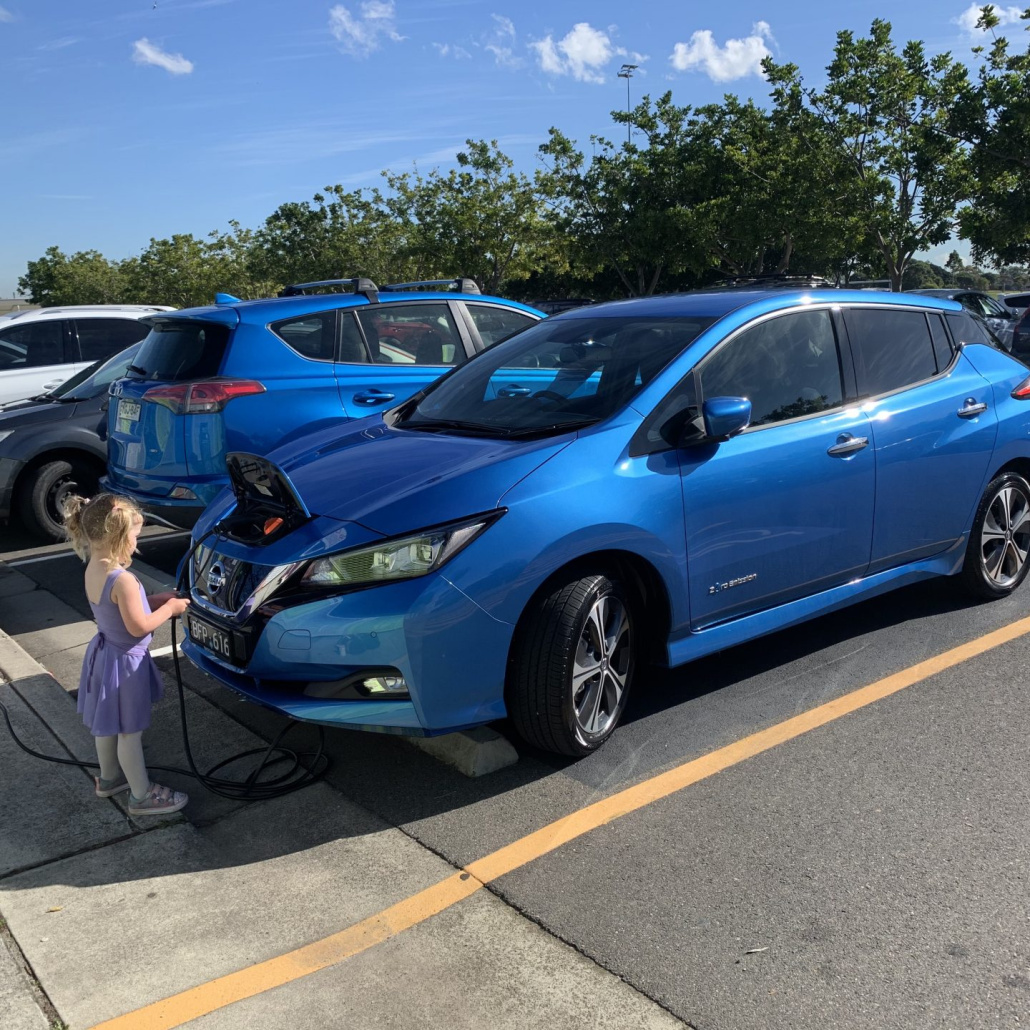 Driving the car on a daily basis brings me more joy than I expected. It feels like I am winning at life knowing that every time I jump in, there are no emissions. I love charging it every night and having the neighbours ask questions. I also love how engaged the kids are in the process. Each time I start the car they check how much charge the battery has, they are the next gen and to see them so engaged is inspiring.

When I originally spoke to Nissan about trialling the Leaf E+ for the week we spoke about a road trip. I mentioned Pearl Beach and we decided I would probably make it there with about 30 per cent charge to spare, which meant the accommodation would have to have an external power source, as there were no public charging stations nearby.

After a few messages back and forth with the Airbnb hosts, who assured me there was an external powerpoint within 4m (the length of the power cord) of the driveway, we decided we’d give it a go.

One of the counter intuitive aspects of an EV is driving in stop-start traffic, or breaking frequently around corners and down hills; if all the eco features are switched on, it uses less battery than driving at a high speed non-stop on a freeway. So although a chunk of our trip to Pearl Beach is via freeway, by the time we take all the twists and turns to our destination, we arrive at our little cottage with 60 per cent charge left. A win!

We eventually locate the outdoor power source and successfully plug in for the night –  there’s that same feeling of achievement the next morning when it’s fully charged.

If the outdoor power set-up hadn’t worked we would have had to drive to Terrigal which is where the closest public charging station is. Although it’s not far, it’s not really what you want to be doing on a relaxing weekend away. 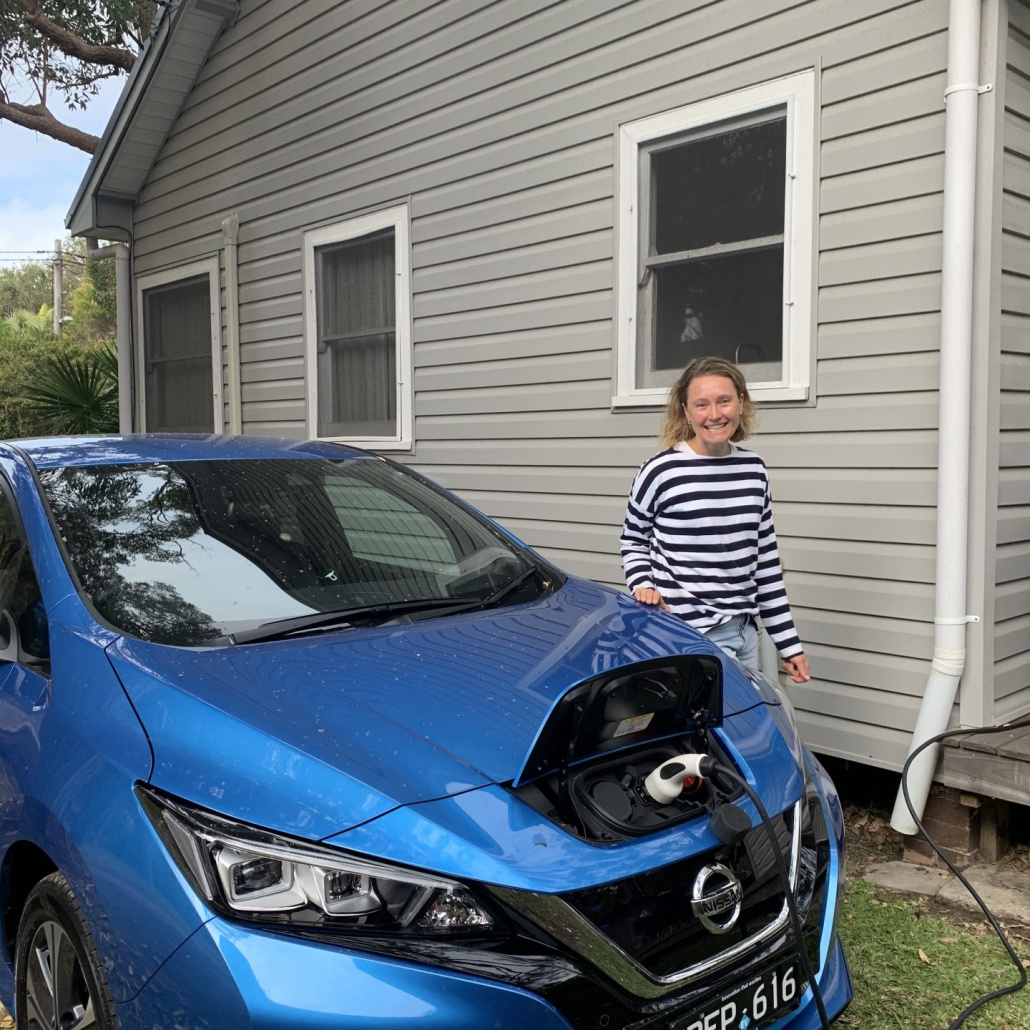 Charging was a success at the Pearl Beach rental beach house

The week of driving our electric car came to a close too quickly. It can’t be understated what a joy it was to drive. From the obvious part of it being electric, to the impressive space for a small car (fitting three children comfortably is no mean feat), and the fact the car is essentially a giant battery on wheels.

It’s true, electric cars are the next gen of transport and it’s mind boggling that in Australia especially we are so far behind. However, the obvious constraint is charging. For those living in apartments, or houses with no off-street parking and access to power, it would mean relying on public charging stations.

Regardless, this city living driver with access to power is officially an EV convert.

RELATED: Why small change is always the answer