Turning food into furniture; is this the future of recycling?

Coffee grounds into tables and green bananas into super-foods, what we learned at a sustainable farming summit

As the mum of one extremely fussy – white food only – child, a toddler who throws more than half of her food on the floor and a kindergarten kid who is generally an excellent eater but who regularly comes home from school with a full lunch box, the food waste frustration in our house is real. But it’s not just us reeling from uneaten Vegemite sandwiches.

Each year an eye-watering 1.3 billion tonnes of food is wasted worldwide, which according to the United Nations, amounts to one third of all food produced, and this waste occurs thanks to us, the consumers. Not only does this waste inevitably end up in landfill, once it starts to rot, it emits methane equating to about 6.8 million tonnes of carbon dioxide going into the atmosphere each year; and that’s in Australia alone. Then there’s the gas emissions that go into producing and processing, packaging, shipping, storing, picking up and cooking any food item. So by throwing food out, we’re not only wasting the food itself but the energy that has already been used to get it into our fridges.

Recently we were invited to attend the Rabobank Farm2Fork summit where we discovered some pretty interesting facts when it comes to our own food waste and what’s being done in a bid to combat it. The Rabobank Food Waste Report found that 86 per cent of Australian households waste food every week, and the main reason was because our food isn’t consumed before its used by date. Buying too much food is another big contributor and for those with kids (us included), 41 per cent of us waste food we’ve prepared that our kids refuse to eat. 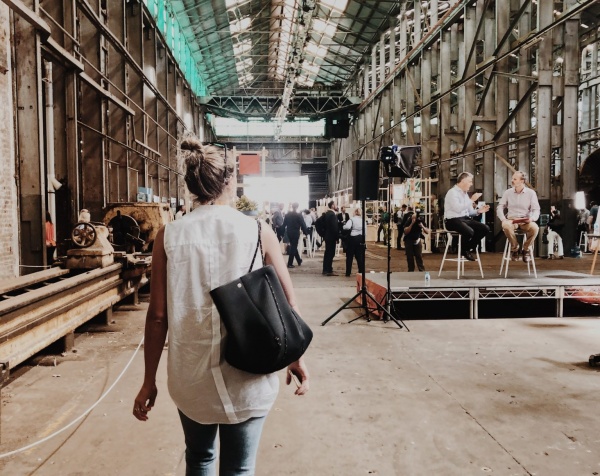 Held on Sydney’s Cockatoo island, the summit brought together primary producers, academics and leaders in the sustainability space to share the latest innovations within the food and farming sector. Australian Research Council Laureate Professor Veena Sahajwalla is one such change-maker working toward channelling waste streams into a new generation of products and materials, including creating coffee tables from recycled coffee grounds and single-use coffee cups.

“The fact is, food waste is one of the common waste streams that should be treated as a renewable resource rather than waste that is dumped,’’ says Professor Sahajwalla.

“Leftover organic material can actually be used in a variety of ways through our micro-recycling technology. Rather than burn unwanted material after harvesting it could be turned into products such as building panels. Even with food packaging, we can use the aluminium and plastic packaging in our panels, or to make filament for 3D printing, or we can use them as alternative feedstock in steel making that reduces the use of virgin materials.

Waste not, want not

Natural Evolution Foods is one of a growing number of businesses reaping the benefits of turning their waste into new products.

They now produce green banana flour – which they discovered by chance is a high-grade superfood – from unripe bananas that were once destined for landfill.

“Each year 500 tonnes of green bananas are wasted because they’re deemed as not ripe enough or too damaged, or not the right shape,’’ explains Natural Evolution foods co-founder and CEO Krista Watkins.

“And in our small farming community in far north Queensland, we discovered that you can make flour out of these unwanted bananas and that it happens to contain the highest grade and level of resistant starch in the world.’’ Green banana flour can be used as a baking substitute or added to cereal and smoothies and has myriad health benefits including being a high source of natural Inulin and 5HTP (5 Hydroxytrytophan), a precursor for serotonin.

Think of the money

Another issue revealed in the Report was that Australians are the fourth most wasteful country in the world per capita, wasting $8.9billion worth of food in 2018. To put that into perspective, that’s $890 per household per year. Online grocery shoppers are more likely to waste food, than those who visit their grocery store, and those who use food delivery services like Uber eats waste 15.2 percent of their food compared to 8.4 per cent wasted by those who don’t. So taking steps to curb waste won’t just help the planet, it’ll also help your hip pocket.

How you can make a difference

When it comes to caring for our planet, food waste happens to be one of the easiest ones we, as individuals can tackle.

Hit the shops instead of buying online – or limit your online shopping to the necessities. And remember, don’t stray from your list!

Check out other ways to reduce your food waste

This story was brought to you by Rabobank. View the report here.