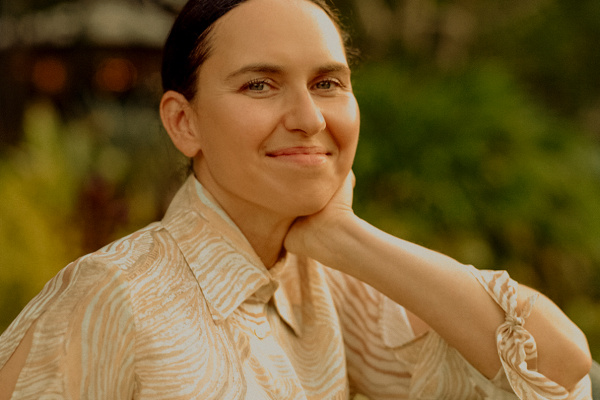 Why the future of Australian fashion is First Nation’s

In conversation with Jenny Ringland

I’m a Dunghutti and Anaiwan person. My family is originally from the Northern Tablelands of New South Wales, but I was mostly raised in Sydney. I grew up in an incredibly political household, so social justice has always been a passion. I’m a director at an Aboriginal PR and research agency in Sydney, Cox Inall Ridgeway. We call ourselves a ‘social change agency’ because that’s at the heart of everything we do.

Growing up as a young Aboriginal person in a metropolitan area off-Country, I was always looking for contemporary expressions of Aboriginality and things that I could relate to or felt that expressed my experience of Aboriginality. I vividly remember, as a teenager, wanting to buy every Christine Anu CD, wanting to go to concerts, and reading Anita Heiss books and just wanting to sort of connect with representations that reflected the world I lived in and how I connected to my culture. So I think that’s probably where fashion became one of those things that I became really attracted to, as a way to be able to express myself contemporarily, and evolving identity, and have fun with it. 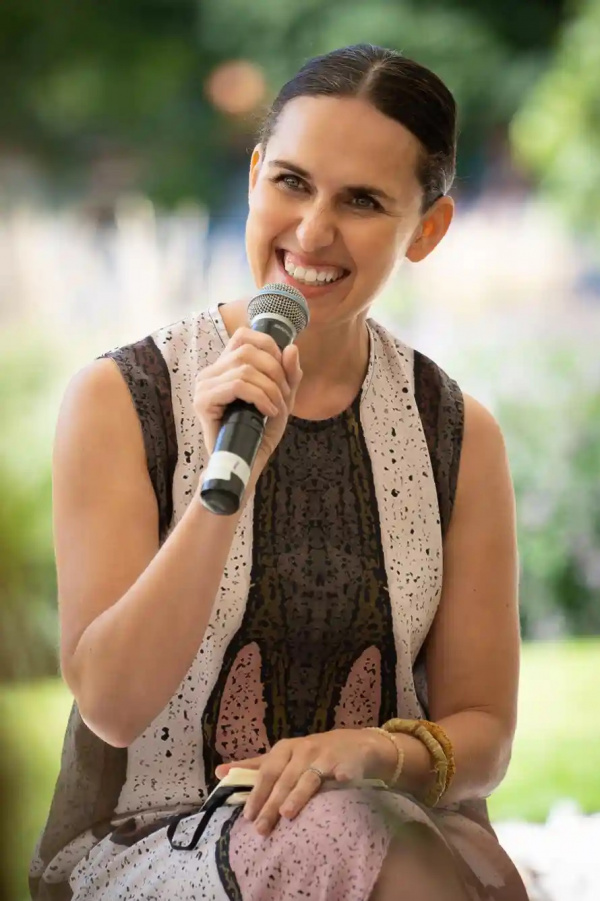 On Samantha Harris Vogue cover in 2010

I keep it in a little special place because it was the first time I’d actually ever seen an Aboriginal person on the cover of a fashion magazine.

I worked as a journalist at NITV in my 20s. I was covering some fashion stories then, and I remember the first … if not the first Aboriginal fashion designer to go to New York, was Natalie Cunningham. And no one else was covering it, but NITV at that time. 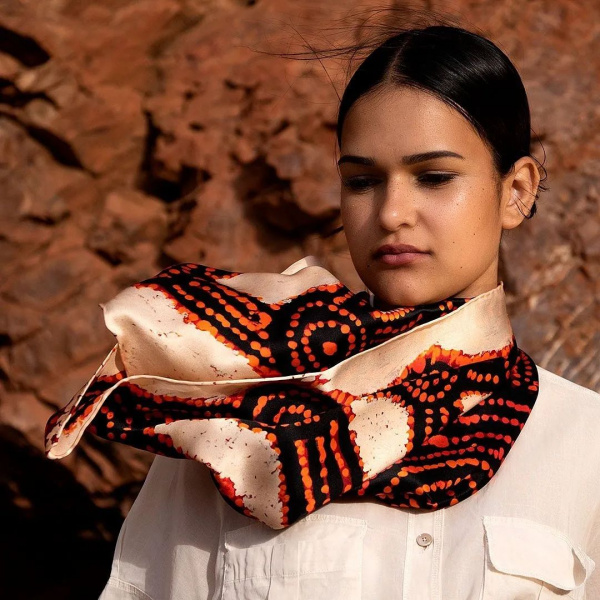 An example of what you will see on @ausindigenousfashion; Malika in Willy Tjungurrayi’s scarf, Untitled

How much can we learn from First Nation’s fashion about sustainability?

We often talk about sustainable fashion as a new idea, whereas in my culture we talk about sustainable fashion as an ancient idea. We don’t see it as new at all. It’s like an unbroken tradition. It’s a way of living as well. It’s not one actionable thing. It’s actually an attitude because in Aboriginal culture everything is so interconnected. You cannot do anything without consideration of Country, people, and spirituality.

Everything is considered an equal measure for every decision, whether that be in business, in family relationships, in hunting, whatever it is. So I think that kind of world view is actually really critical and can be applied really productively to business and to the fashion industry.

I think that the other point that I often make is that a lot of people say to me, “It’s very hard to reconcile these two worlds because that tradition was embedded in a time where we weren’t living in this big capitalist society and had all of these production schedules.” But I think if you look at Aboriginal businesses today, our values are not inconsistent with the modern world. We have evolved and adapted. We’ve been resilient. We’ve created new models of business that allow for that. And you look at people like Denni Francisco at Ngali, Julie Shaw at MAARA, the work of a lot of the remote art centres who are actually living that practice inside of a business structure, a modern business structure.

I think we tend to create the fashion pathway for people and say, “You have to fit into this.” I think now is the time where we actually have to understand, what does a fashion pathway look like from an indigenous point of view? I don’t think that’s really been explored.

I think we have such rich talent in Australian fashion labels, in First Nations fashion labels, that we can and have shown that we can make amazing work. I think where we can really lead the world is in drawing on the world’s oldest living knowledge system of sustainable design, and actually show the world what fashion design process can look like and be commercially successful.

I don’t want to say favorites, but I’m a huge fan of MAARA Collective. They’re one of my absolute favourites. Julie Shaw at MAARA really pioneers what collaborative partnerships in fashion look like. She collaborates with other Aboriginal artists a lot. And there’s a lot to learn from her, I think, about that process. 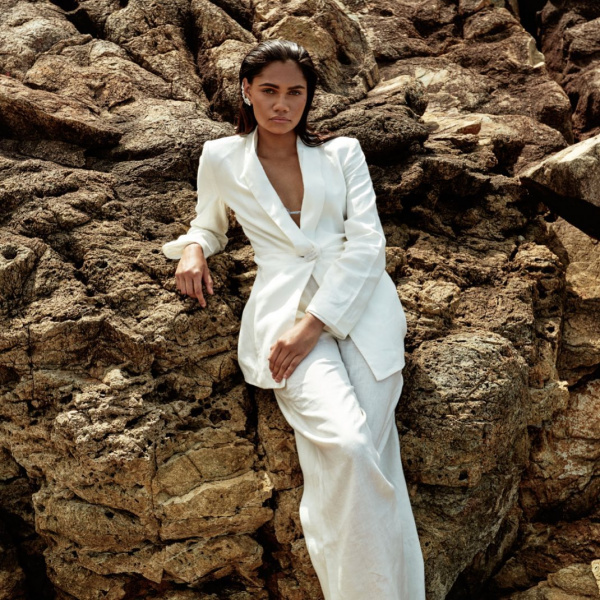 I love Ngali as well, the Melbourne brand. They also work with artist, Lindsay Malay, but they just make the most amazing silks. It’s a really different palette to what we might see in artwork from other parts of the country. I just think it’s really lovely. 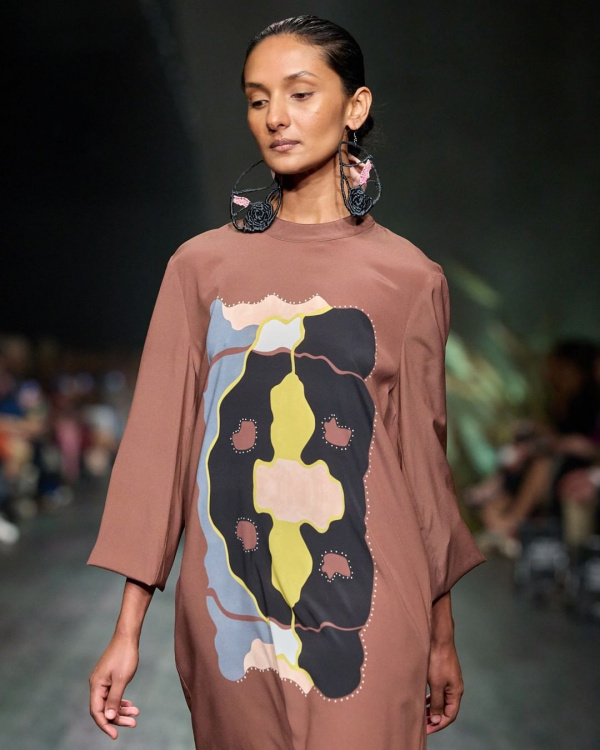 Where to from here?

I think if you were taking an Aboriginal worldview, we actually need to build trust, respect, and relationships and listen to each other and understand each other. And then we can grow together in business. I think the way Aboriginal communities approach business is we build that respect and connection first.

I’d just love to see a big symposium or a summit where rather than the industry saying, “This is what we need. We need to create an internship or we need to do this,” actually just listen to the ideas and aspirations of the community, and then together we can create something we might not have even imagined before.

RELATED: Why we have so much to learn about sustainability from our First Nation’s People