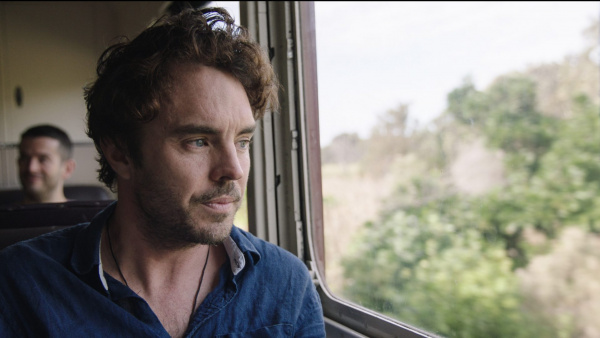 How Damon Gameau sees our future

Regenerating Australia: a new film about hope, creativity and community

Damon Gameau’s new film Regenerating Australia, a creative, hopeful expansion on the solutions explored in 2040, could not have come at a better time.

It’s posing the question: “What would Australia look like in 2030 if we simply listened to the needs of its people?”. Set on New Year’s Eve 2029, the film takes the form of a news bulletin hosted by Kerry O’Brien looking back on the decade that was (or could be) if we transitioned to a more equal, renewable economy built on connection, community and nature.

Damon, who also brought us That Sugar Film, spent four months following the 2019/2020 bushfires listening to a diverse range of Australians talk about their hopes and wishes for a fair and regenerating future, and the result is a story of solutions featuring Sandra Sully, Gorgi Coghlan, Tim Flannery and David Pocock, along with activists, Indigenous groups, school children, politicians and more.

“How do we bring vitality and renewed growth to our ecosystem and our social systems? That’s the exciting adventure that we all need to begin now,’’ Damon says.

“It’s not enough just to be sustainable. We’ve gone way beyond that, we’ve breached too many boundaries to get to a sustainable level. We now have to enact a regenerative process. We’ve got to regenerate to get to sustainability. And that’s really what we’re trying to talk about here is that it’s not enough to just tinker around the edges anymore, we’ve lost that opportunity, we need a pretty large shift.” One of the key themes of the film is the critical importance of transitioning from fossil fuels to clean energy without delay.

“It’s understanding the opportunity that we have in this country, we have as much wind and solar as any country in the world. We have this enormous landscape with these ancient soils that are desperate for organic matter and life and carbon to be put back into them,’’ he says.

“We can reforest all these incredible unique landscapes that we have, that the jobs of the future can just provide the most extraordinary meaning and value at a time where people are just desperate for meaning.”

Damon acknowledges at this moment in history we are all feeling full, exhausted and tired, and there is the danger that we will switch off, give up and decide it’s all too hard to combat climate change. Tuning into our communities is the best place to start.

“Change is never going to occur from the top, it’s going to happen thanks to groups of organised people getting together. And eventually that becomes a cultural norm,’’ he says.

“Then the politicians follow because that’s what the population is dictating. Which is exactly what we see happening in our Northern Rivers community now. That’s what gives me the most hope, that extraordinary, galvanised sense of community, which is the whole concept of this film, it is a community led recovery.”

Regenerating Australia highlights the need to foster the growth of both regional and city communities through an environmentally focussed lens.

“We are talking about how we create thriving regions again, where people want to stay and work, they’re proud of their town because there’s jobs there and there’s life there,’’ Damon says.

“We want to recognise the people we walk past in the street and feel connected and that can only happen if we make sure that wealth and resources are evenly distributed.”

One of the resounding messages that came from Damon’s four months of interviews and listening was a desire to really listen and learn to Indigenous groups around Australia, which translated into a vision of a landmark First Nations government announcement in the film.

“Even the most conservative farmers were talking about wanting to understand the knowledge systems that are embedded in this landscape that have been cultivated over a millennia,’’ Damon says.

“It’s like, in this time where we have had such degradation, why wouldn’t we consult with those people that get it, who know this land better than anyone? I thought that was really heartening, actually.”

As to what happens now it’s up to us to acknowledge and remember we all feel better with the world when we are connected to nature, and that should be one of our guiding principles. Start small, plant some herbs, start a compost, work on regenerating your own backyard, or the nature strip in your street.

“What could be more meaningful than regenerating your planetary home? There is nothing more meaningful than that. And what a legacy to leave that I often think of future historians looking back to this and going, wow. That amongst all that chaos and nihilism and species extinction and misinformation, there were groups of people that chose a different path and they wanted to plant the seeds of regeneration and create a thriving future society. Like come on, get on board. Let’s start regenerating.”