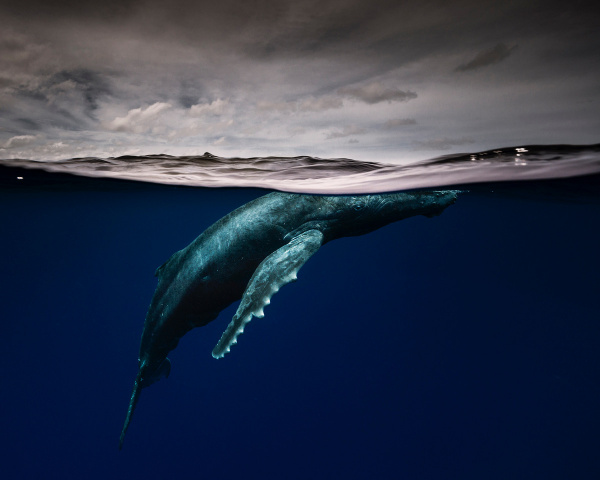 A young humpback whale surfaces to breathe and rest. We have so much more to learn about these beautiful creatures. Image Matty Smith

Why we need to talk about the ocean

In partnership with Ocean Lover’s Festival

From microscopic life to the largest living animal, the ocean has it all. And with over 40 per cent of the world’s population living within 100 kilometres from a coast, you’d be forgiven for thinking we know all that we need to know about the ocean. The truth is though, this essential component of earth’s ecosystem – a source of biodiversity, food, and life – remains largely unexplored. While an incredible 94 per cent of the earth’s living species exist within the oceans (ponder that stat for a moment), less than five per cent of the planet’s oceans have been explored.

We’re never too old (or young) to learn more about the ocean and a shallow web search reveals fascinating truths such as the earth’s longest chain of mountains at 65,000km in length is almost entirely under the water; there are more historic artefacts under the sea than in all of the world’s museums; it’s possible to find rivers and lakes beneath the ocean; and a little closer to home, Sydney houses more fish species than the entire Mediterranean Sea. And we haven’t even touched on climate change yet.

When you consider that a healthy ocean regulates climate and reduces climate change impacts, it’s safe to say the ocean has an almighty job. Not only do ocean currents distribute heat across the globe, regulating temperature and weather; the ocean can absorb over 90 per cent of the heat and approximately 30 per cent of carbon dioxide emissions produced – if it’s in good health. For decades though, people assumed that the ocean was limitless and immune to human impacts. Of course, over time scientists have come to understand the devastating impact and continued threat that human activities such as overfishing, pollution and habitat destruction has on our waterways.

According to Maddy Langley, PhD Candidate, Centre for Marine Science, and Innovation at the UNSW, when we think about protecting our oceans, especially here in Sydney, we need to consider the vast habitat that our coastal areas provide for thousands of important species.

“The role coastal habitats play in regulating global climate cycles is so important and particularly in NSW it’s the seaweed forests that play such a critical role. Everyone is quite familiar with the coral reef, but Operation Crayweed looks at our local ocean communities which are temperate seaweed dominated reefs. We’re discovering more about the way our seaweed forests regulate oceanographic processes and provide habitats for different communities, from fish to invertebrates to bacterial communities.”

As well as raising awareness around the importance of these habitats, Operation Crayweed is conducting restoration work. “That for me is where a lot of the hope lies,” says. “When we can identify causes of decline (in the case of crayweed found along the NSW east coast, poor water quality) and hopefully mitigate those causes of decline, we can go in and give these seaweed communities a helping hand; it’s not only conservation but restoration and rewilding of our coastlines.”

From the sunlit to the mysterious dark of the deepest parts of the planet, the climate crisis has given us all a renewed appreciation for our planet’s oceans and the marine life that lives beneath the water’s surface, and we’ve all got a part to play. While awareness is at the fore, it’s initiatives like the Ocean Lover’s Festival, which open the conversation around ocean issues, solutions, and community action at a grassroots level. 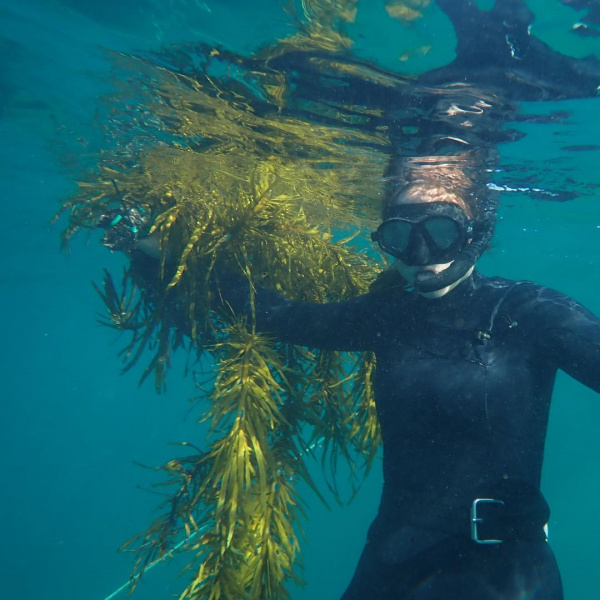 Our oceans cover more than 70 per cent of the earth’s surface; and this festival gives all of us an opportunity to understand how vital marine environments are to the planet. It’s a practical opportunity for adults and children to immerse themselves in an understanding of the ocean and the significance of clean seas and restored ecosystems. Beyond inspiring action and behavioural change, it’s designed to bring awareness and action for the oceans to the widest possible audience. 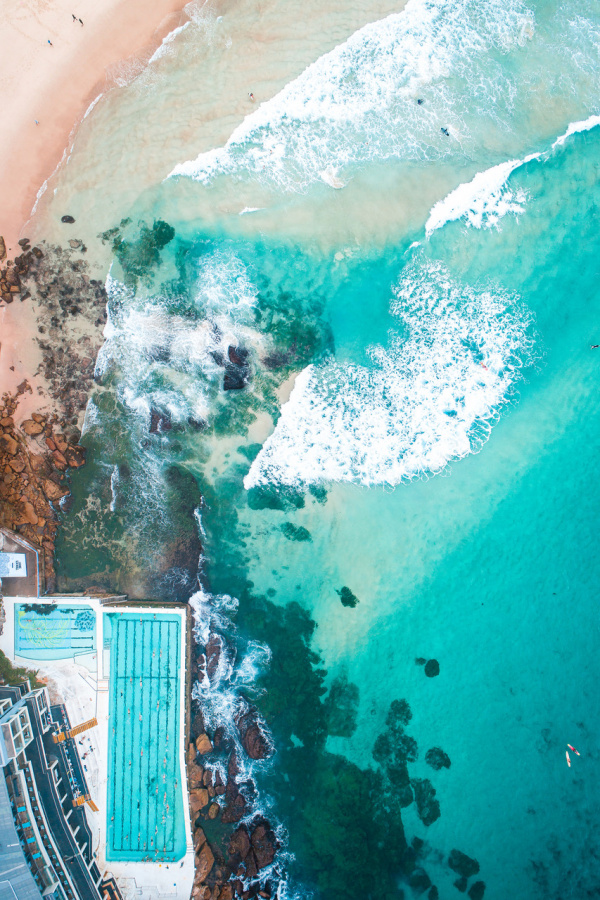 Key Events of the Festival

Get underwater, up close, and personal at the Crayweed Installation. Set in Bondi Icebergs swimming pool, Operation Crayweed has recreated a restoration site with a small subset of crayweed to demonstrate the transplantation and restoration process. So, don your swimmers, grab a snorkel, and enjoy this immersive installation.

“It can be easy to ignore underwater ecosystems because you can’t see them until you’re under the water’s surface; but not everyone is comfortable jumping off the rocks and into the ocean, or diving into the seaweed reefs to have a closer look. Having the Crayweed Installation in an accessible environment like Bondi Icebergs where people can submerge under water and engage with the ocean will be hugely beneficial,” explains Langley.​

The other aspect of this exhibit is Living Seawalls, a project coming out of the Sydney Institute of Marine Science which aims to bring biodiversity back to artificial structures in urbanised areas. Instead of having dimension-less structures or flat sea walls that are the boundary between the land and the harbour, Living Seawalls are beautifully printed tiles which you can install onto walls.

‘These tiles feature lots of nooks and crannies that mimic natural habitat like sandstone-barnacles, and we’ll have example tiles in the pool as well so people can touch them, see them, and interact with them. We’ll also feature giant artworks of Crayweed and the Living Seawall in the pool,” says Langley. 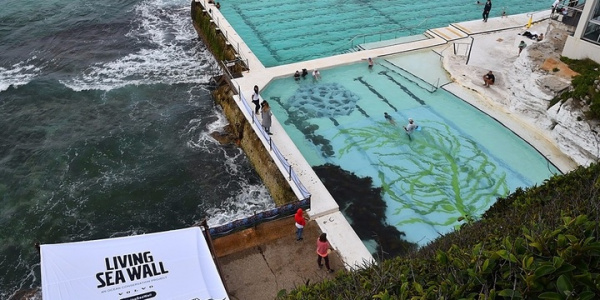 The Living Seawall Installation will happen at Icebergs in Bondi

Science in your Swimmers

Curated by Fizzics Education, over 20 scientists will share their research knowledge in the Ocean Lab and on the Sunshine Stage each day between 11 am to 1pm. Beachgoers can literally turn up in their swimmers to hear from scientists and join free science workshops for kids and adults, and to find out what scientific topics are inspiring the next generation. Meet the scientists working with Sydney Institute of Marine Science. Learn to freedive! Ocean lovers will also get to explore Bondi’s hidden side – beneath the waves. This four-hour taster course will show you how to use breathing and mental techniques to extend your breath-hold and relieve stress, how to duck-dive and equalise your ears so you can dive deeper, how to understand and respect the ocean environment, and how to keep yourself and your buddies safe in the water.

Come and view an art exhibition with a twist. School students around Australia of all ages have been invited to repurpose rubbish into prize-winning artworks with this exhibition featuring the finalists of this creative competition. The competition promotes concepts about closed loop recycling, litter and rubbish impacts on the ocean and creative and thoughtful ways to make better everyday decisions by turning trash to treasure. 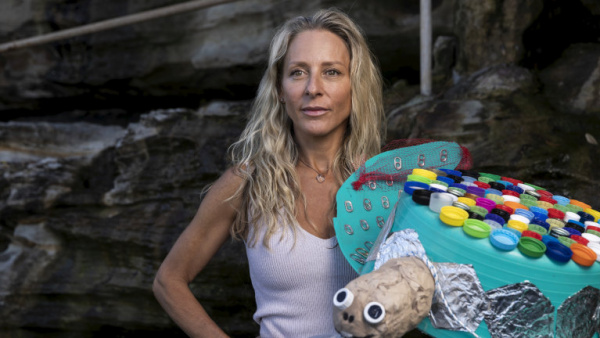 RELATED: Sam Elsom is changing the world, one seaweed plant at a time

RELATED: Why Stephanie Gilmore is the original conservationist