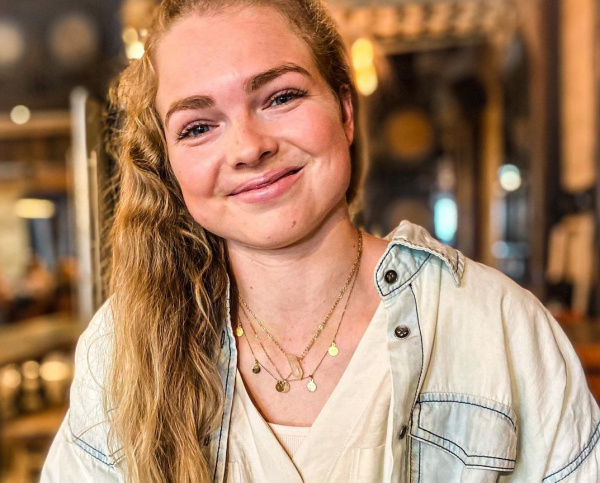 Nutritionist Nina Gelbke on what it's really like to be vegan

According to nutritionist and athlete Nina Gelbke

It’s 2022 and veganism is no longer a fringe outlier associated with Byron Bay and Mullumbimby. It’s hard to gauge just how many of us are turning to a plant based, vegan diet but some studies estimate in 2021 there was a 40 per cent increase veganism. Convenience vegan foods now have their own aisle, there are dedicated vegan restaurants and it’s not impossible to eat in a regular restaurant and avoid animal products.

In 2020, the value of packaged vegan food in Australia is projected to reach approximately 215 million Australian dollars. Between 2015 and 2020, Australia’s vegan food market is projected to be the third-fastest-growing vegan market in the world with a growth rate of 9.6 percent.

Tell us the story of becoming vegan, what was the tipping point for you?

Growing up I was surrounded by animals and pets with the dream of one day becoming a vet. I made the decision to stop eating meat and go vegetarian when I was 9 years old, when I made the connection that the meat we ate used to be an animal, plus I never really liked eating meat much anyway.

The decision to go vegan came quite a few years later, when I was 17 and watched the documentary Earthlings, a very confronting film about how animals are used in various industries from food to fashion and entertainment. I decided then and there that I was going to pursue a vegan diet and find out what I could about how to get all of the nutrients I needed to be healthy from plants, simply because I felt (and still feel to this day!) that this is what aligns most with my own values and morals.

Is being vegan and caring about the environment connected for you personally?

It definitely is. Being vegan, or even just choosing more plant based foods and meals, has such a direct positive impact on the environment as it reduces our carbon footprint and the amount of resources consumed, such as water and land. With the growing population and increased concerns around climate change, taking some positive steps where we can to reduce our impact on the planet is something really powerful we can all do to create big change together as a whole, and really important if we want to change the direction we are unfortunately heading in.

It can be quite depressing and overwhelming knowing where we are headed in terms of the impact we’ve already had and continue to have on the climate as human beings, however focusing on the positive and realistic changes we can make – such as making more plant based meals, reducing our consumption of animal products and also choosing and supporting more carbon/plastic neutral companies can turn this into something a lot more empowering. Our choices and actions make a difference!

IS it a challenge in social situations, really?

Most people these days are very understanding and accepting of my choices, and even interested to learn more. For people who do judge and make comments, I try to take it with some humour and stand up for what feels right for me.

In terms of food, most restaurants nowadays have at least one, if not more, plant based options on their menus which is so great to see! If not, asking the staff about what they could do usually works really well, or asking if one of the dishes could be made with a few tweaks.

does having a supportive family help?

I’m very grateful to have a family that was always very supportive of my choices in going vegan, even if they weren’t vegan themselves. Over the years they’ve made so many positive changes to their own diets and now eat almost entirely plant based too!

I think communication is really important, making it known to your family that this isn’t some ‘fad’ you are doing or that you are trying to make things difficult, but a decision you’ve made that you feel aligns most with your values and something that means a lot to you, which you would really appreciate their support and understanding on.

Offering to cook delicious plant based meals for your family, being patient with their questions and compassionate and non-judgmental with your answers, and helping them out with ideas on what to cook and eat can be really helpful. As most people just feel a little uncomfortable with vegan food as it feels unfamiliar and isn’t what they would usually be eating, so it puts them out of their comfort zone. With time and experience, as well as seeing how easy and delicious plant based meals can be, most people become very supportive, or at least accepting.

It might mean sometimes having to cook your own food and eat differently to your family, but making enough food to share with everyone can be a great way to bring that connection and bonding over food back!

What’s the most common question you get asked about being vegan?

Still one of the most common questions I get about being vegan, especially being an athlete and CrossFit Coach, is ‘where do you get your protein from?’ Or ‘how do you get enough protein as a vegan?’.

It’s such a common misconception that vegans struggle to get enough protein, but it really comes down to knowledge around which plant foods are great sources of protein and ensuring you are replacing the animal protein foods with these foods, rather than just removing them. So my answer is explaining how easy it actually is to get enough protein as a vegan athlete, that I just ensure my meals all contain a good serving of plant protein rich foods – such as tofu, tempeh, beans, lentils, chickpeas, bean pasta, edamame, and sometimes plant based meat alternatives.

I also include a daily plant protein powder, such as the Myvegan Soy Protein Isolate or Vegan Protein Blend. I also love telling people about the studies that have been done on the effectiveness of plant based diets versus omnivorous diets when it comes to building muscle and getting stronger, and that the findings showed when protein intake is matched gram for gram, there is no difference between the two diets – showing that plant based diets don’t put you at any disadvantage when it comes to getting stronger or reaching your protein needs, even for athletes! 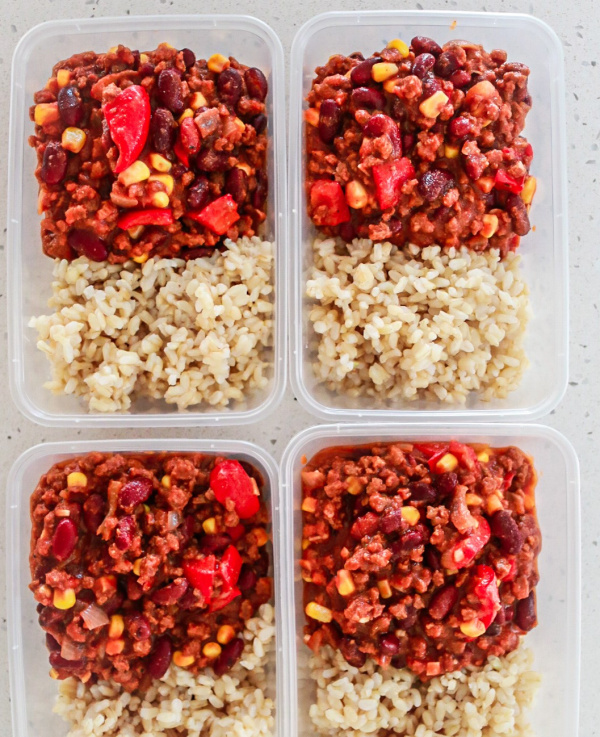 What are some of the products / foods that are easy to slip up on when you are starting your vegan journey?

Definitely hidden or unexpected ingredients that are often added to food products – the biggest ones being milk powder, egg white or gelatine – would be the most common accidental things that can be easily missed. I think it’s really important not to be too hard on yourself when you buy or eat foods that you realise afterwards weren’t vegan. Veganism isn’t about perfection, it’s about doing your best and as humans, we will always make mistakes or even perhaps fall into situations where being vegan simply isn’t possible. Try to learn from those experiences and keep moving forward to try to improve on that next time – for example, remembering to check ingredients lists and food labels, and learning the different names of animal derived ingredients.

How is it generally received when a stranger finds out you are vegan?

Really well! In my experience, most people approach it with curiosity and ask questions about being vegan or why I decided to go vegan. They’re definitely very interested in the foods and meals vegans eat, and whether it is difficult or not.

Sometimes they will say things such as “I could never give up X food’…but I try to remind them that it doesn’t have to be all or nothing and they can still create really positive change simply by aiming to eat more plant based meals or aiming to eat ‘as vegan as possible’ for them right now.

I always make an effort to be really open, compassionate and non-judgemental with my conversations and answers around Veganism, as I never want to make people feel attacked or push them away from the idea of going vegan. I think just sharing your own story and showing how great it is to be vegan is a really powerful form of spreading that message!

Do you agree with the philosophy of eat the rainbow?

Absolutely! Eating the rainbow is such a great way to encourage us to include more fruit and vegetables and eat a wide variety of different plant foods – one of the most beneficial things we can do for our gut health and overall health. Each colour signifies different nutrients, especially antioxidants and polyphenols, found in foods, which each have beneficial effects on our health!

I also think that aiming to eat the rainbow helps encourage more creativity and appreciation for our food, and fosters a positive relationship with food that focuses on what we can ADD to our plates to better nourish and fuel our bodies, rather than removing and restricting foods.

What does a typical day on a plate look like for you?

Every day does look slightly different, but I do stick to the same types of meals just because this is what I enjoy eating and what makes me feel my best!

Before training in the morning I will usually have some toast with peanut butter, banana and cinnamon.

Then breakfast after training most days will be overnight oats with flaxmeal, soy milk and I’ve been loving adding the Myvegan Soy Protein Isolate for a boost of protein! Topped with fruit such as banana and berries, plus some nut butter or seeds.

Lunch is leftovers from dinner, or a wrap with salad, falafel and hummus, or tofu veggie sushi made with leftover rice.

I generally have an afternoon snack of a fruit smoothie, soy yoghurt with granola and fruit or some kind of bar plus a piece of fruit.

Then dinner really varies but always aiming for a balanced meal with plenty of colours in there! This could be a tofu stir fry with rice or noodles, lentil pasta with a veggie sauce, a burrito bowl with beans and guacamole, or tofu veggie curry.

I have to end the day with something sweet, which might be soy yoghurt with granola and berries or something I’ve baked like banana bread or a cookie!

I love cooking and I prioritise fuelling my body with lots of good food to feel and perform my best! 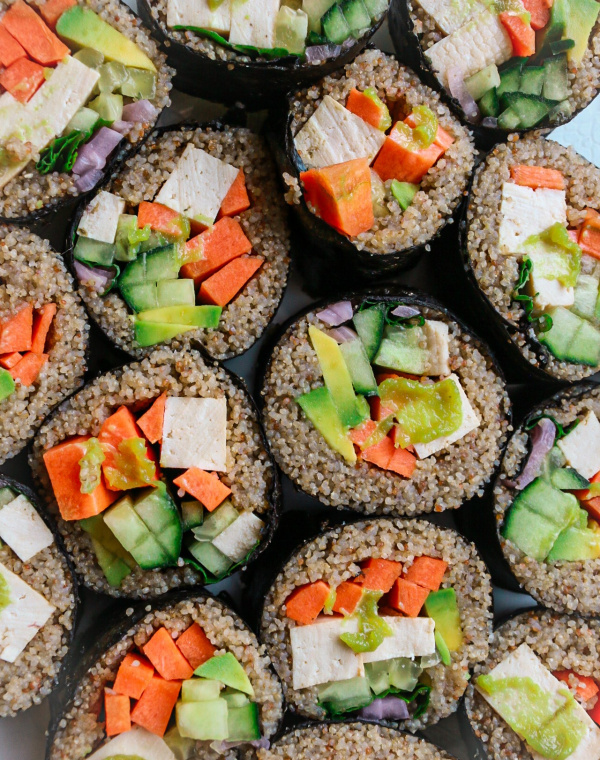 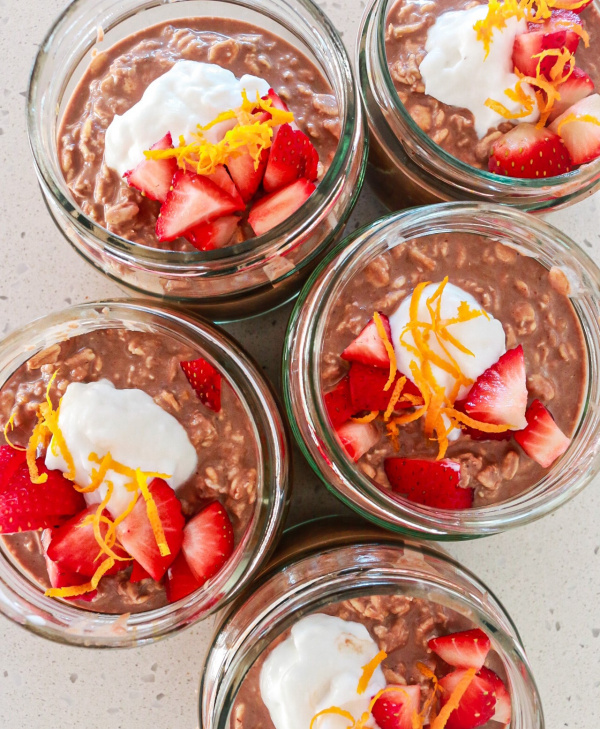 *Nina is an ambassador for Myprotein

RELATED: What is cruelty free beauty