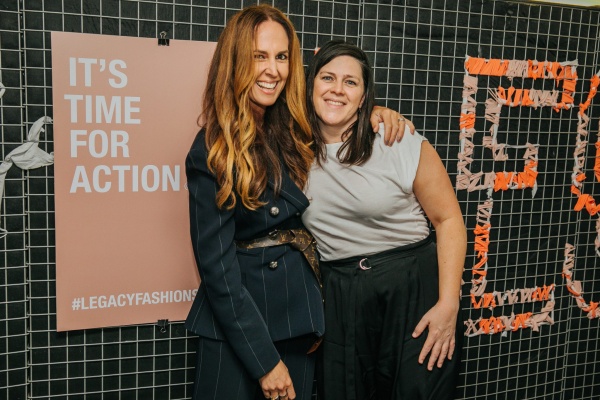 How #whomademyclothes started a revolution

When Melinda Tually decided to hop on a plane and attend an ethical fashion conference in London in 2013 she could never have imagined the impact it would have on her life. It was several months after the horrific Rana Plaza factory collapse in Bangladesh, which killed more than 1,100 people and injured a further 2000, and the industry – and the world – was demanding change. Change that Melinda was about to be an integral part of thanks to a “totally organic” and chance encounter with Fashion Revolution founders, Carry Somers and Orsola de Castro.

“I met them at this ethical fashion event and put my hand up to run it (Fashion Revolution) down under,’’ recalls Melinda, who earlier this year also founded responsible fashion event, the Legacy Fashion Summit.

For the last five years Fashion Revolution has been campaigning to drastically change the way our clothes are sourced, produced and consumed via their #whomademyclothes initiative. It simply challenges everyone to ask their favourite brands, who made their clothes, with the vision that one day all clothes will be made safely, fairly and without impact on our environment.

The evolution of a revolution

On the eve of the fifth annual Fashion Revolution Week, Melinda, who is arguably the most important woman in Australia and New Zealand’s involvement in spearheading this conversation, shares her insight into the complicated world of the ethics of fashion.

“Six years on there is acceptance that brands are responsible for the impact (they have) and the treatment of workers. We’re now seeing the conversation of responsible fashion in the mainstream, not a week goes by without an article in the media,’’ she says.

“There are 174 brands and counting that are publishing their factory lists, who are understanding that transparency leads to accountability, change and trust. This is when originally there were many IP concerns about publishing these lists. That is massive change.’’

But Melinda says there’s still so much work to do, and it’s a lot more complicated than comparing the prices of t-shirts or questioning the fast fashion model.

“One of the biggest issues we have is living wages – we haven’t cracked that nut for good reason, it’s really complex. There are some fantastic initiatives underway at the moment but workers overall are still not receiving a living wage, they are on minimum wages. In many countries this isn’t sufficient for a livelihood,’’ she says.

“It’s not something a brand can fix. We need government to agree on price setting, we need unionisation so that workers can have a say. It involves, government, factory owners, and it needs country wide approaches.”

Likewise the concept of categorising brands via comparison reports or rating systems is tricky and the danger in simplifying it is the increase in greenwashing, Melinda says.

“Saying someone is good or bad is really hard. You have to dig deeper into the nuances of the reports and the complexity of the report and don’t take it at face value,’’ she says.

“For a consumer the best approach is to find out what the brand is telling you, use the report as a benchmark and then go to the brand, are they communicating what they are doing? And if they’re not say, ‘hey can you share what your initiatives are?’.’’

This year one of the focuses of Fashion Revolution Week is policy change, because consumer power can only go so far, Melinda says.

“We have reached the point where voluntary mechanisms have got us so far. And policy change can help level the playing field. We encourage everybody to use their consumer voice with their local govt candidate, write to them, approach them via social media,’’ she says.

And using our consumer voice with the brands we love, is still the most effective way to insight change.

“The hashtag #whomademyclothes is the quickest and easiest way to pose the question to brands. The more brands see their customers asking the questions the bigger the impact.’’