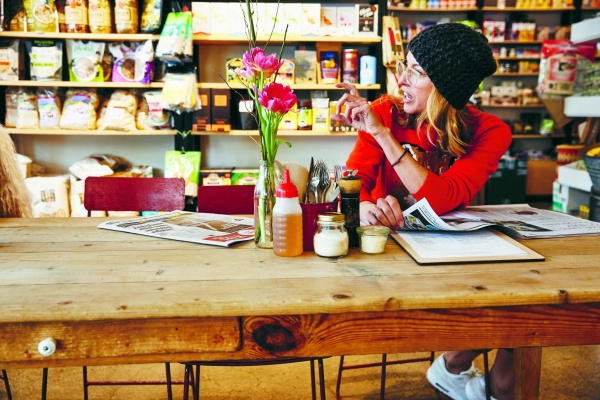 “It’s about inspiring people to live an elegant life”

Sarah Wilson is a woman you want on your team. She’s a New York Times bestseller, founder of an entire global anti-sugar movement, journalist, former magazine editor, philanthropist, physics scholar and zero-waste advocate. She likes to hike, rides her 10-year old yellow Fixie bike everywhere and hasn’t bought butter in two years (because she saves the leftovers from cafes, and you should too!). Her latest project, Simplicious Flow is a zero-waste 348-recipe tome – or basically ‘a whole heap of capsule cooks’ that use up the entire list of ingredients, stalks included. There’s even a recipe for banana bread using banana peel, not the actual banana. Here’s our chat with one of the most inspiring women you will ever meet.

YOUR LAST BOOK, FIRST, WE MAKE THE BEAST BEAUTIFUL WAS A REAL-TIME ACCOUNT OF YOUR BATTLE WITH ANXIETY, HOW DOES A SUSTAINABLE COOKBOOK FIT IN?

In many ways, it’s the cookbook I’ve always wanted to write and now is the time where the world’s kind of ready for these types of messages. It took me two years, from beginning to end, including five months of shooting, but the various ideas and research I’ve been working on, really, for my entire life, it’s been my thing.

WHY SHOULD WE BE WORRIED ABOUT OUR FOOD WASTE?

I say this in the first page of the book, if you care about food, you’ve got to give a shit about food waste. If food waste was a country it would be the third biggest country in the world after China and the US. Some experts say it’s the single biggest environmental issue right now. It’s not about the government or farmers or industry. It’s us. We’re throwing out about a third to a quarter of our food each week and that is causing extreme problems. CO2 being just one of them, and that doesn’t even bring into play the plastic packaging and the transport cost.

WHAT CHANGE DO YOU HOPE IT INSPIRES?

It’s about inspiring people to have an elegant life where you’re not wasting time and money on really stupid practices. If people can just start small – they might look through the book and see one or two tips – then it might be enough to get them to open their eyes a little bit. They might make their own DIY keep cup (which I show how to do with old elastic bands) and they might enjoy the change and get a slightly self-righteous kick out of it. Then they might go, “well, alright, I’m going to tell the waitress I don’t want bread with my breakfast before she brings it out.”

HOW DO YOU FEEL ABOUT RECYCLING?

Even if the consumer puts it in the right bin and does all the right things, very little of it is actually getting recycled. Plus the actual cost of recycling – the environmental cost – is probably the same as producing it from scratch in the first place. I don’t have a recycling chapter in my book for that very reason, because I think it (recycling) encourages a lazy, low hanging fruit approach to a much more serious problem.

OF THE CITIES IN THE WORLD YOU’VE VISITED, WHICH IS THE MOST ECO-CONSCIOUS?

Slovenia’s capital, Ljubljana was voted the most sustainable city in the world this year by National Geographic. They have loads of initiatives; the inner hub of their city is car free, they are bottled water free with bubblers everywhere, have a really great bike scene and great public transport. Their recycling systems are ridiculous – essentially you have to earn credit for recycling to be able to access the actual rubbish bin.

FOR THE FIRST TIME IN SEVEN YEARS YOU HAVE YOUR OWN APARTMENT AND MADE THE PLEDGE TO STAY PUT RATHER THAN JUMPING ON A PLANE ON A WHIMM WHEN YOU ARE STRUGGLING WITH ANXIETY, HOW DOES IT FEEL?

I sort of have an adage that I’m working to at the moment, which is ‘do what you’re not doing’. So, if you’ve been doing something that hasn’t necessarily delivered you to the next level of where you want to go in life then do what you’re not doing and take a different approach. It’s been a nice experience to travel less. It has made me more mindful.

DESPITE BEING A VERY PRIVATE PERSON, YOU ALSO LOVE HUMAN CONNECTION, TELL US MORE?

That’s my next mission to seek out human connection. The biggest thing with modern life is people aren’t questioning the information that’s being fed to them. People aren’t actually making decisions for themselves based on an ethical, environmental or sustainable standpoint. I think more than ever we are on a conveyor belt being driven by individualism and materialism. So, I guess I fear that we’ve fallen a little asleep at the wheel. 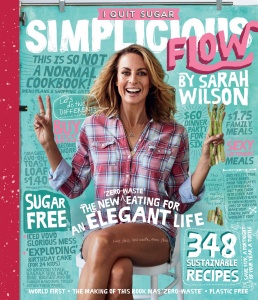 Simplicious Flow is out now.