Heidi Lenffer is changing the way the music industry operates by offsetting tours, one ticket at a time

Heidi Lenffer, is a musician turned environmental activist and entrepreneur, whose desire to tackle the climate crisis started with a song. Which is fitting given the Cloud Control lead singer is an ambassador for the inaugural Environmental Music Prize, a Greenpeace, Green Music Australia and ARIA recognised initiative, which aims to encourage Australian artists to write life changing music that inspires a revolution. No pressure, of course.

“I am the product of having my own heart swayed towards climate action through a specific song. I’ve seen how a song can affect behavioural change and sustain my conviction, to be a renewable source of determination,’’ Heidi says.

“The song is 4 Degrees, by Anohni and it was almost as influential as reading the climate science for me. It’s apocalyptic, deliberately provocative and demands a reaction. I took the grief in that song and turned it into fuel for my project.”

The project Heidi is referring to is FEAT (Future Energy Artists) an organisation she founded in 2019 after discovering a 15-date tour by her band Cloud Control would generate 28 tonnes of carbon emissions – the equivalent of an average household’s annual output.

FEAT, supported by Matt Corby, Courtney Barnett, Julia Stone, Montaigne, Vance Joy, and Peking Duk exists to invest in renewable energy so as to offset the environmental impacts of the music industry

Having realised what a huge impact touring has on the planet, Heidi says she knew she had to find a solution, to which at that time, there was none.

“I essentially embarked on a climate science 101 crash course that I did over a period of four to six months. The beautiful outcome from that was becoming quickly embedded into a community of people working across different elements of different sectors, but working with the same aim,’’ Heidi says.

“FEAT came about because I knew I wanted to work within my sphere of influence, which was the artist community. Transitioning the music sector to one that was renewably-powered rather than fossil fuel-powered was an undeniable opportunity staring me in the face. I had to figure out how to bring all the artists in my sphere into this exciting movement, which is like a global energy transition.”

At the end of 2021 FEAT launched Solar Slice, a 1.5 per cent ticketing surcharge to fund carbon reduction measures for the live music and entertainment sector. At the time of our interview, the pilot tour to test out the technology was on hold because of COVID. 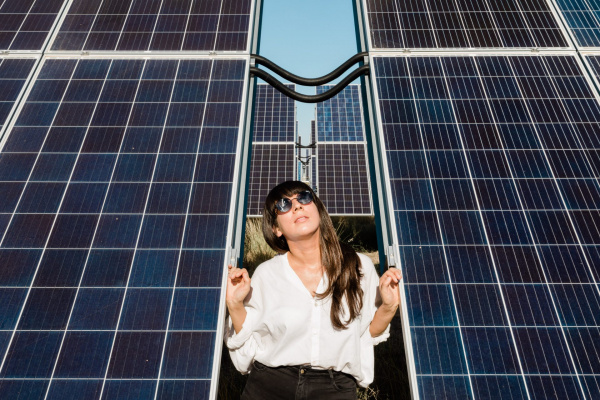 The power of song

Heidi is passionate and unwavering in her vision for a brighter future, which is why she is championing songwriters who use their platform to inspire change.

“I think the only responsibility that we have is to speak our truth. For some artists that will mean not speaking out on matters of climate or other social injustice or environmental injustice. I think artists have an opportunity to speak out if they want to. I also think artists bring so much to the world just by being themselves, writing their music,’’ Heidi says.

“If you think about it from angle of the environment or the natural world being something that you’ve had a relationship with in your entire life, and that this Environmental Music Prize is an invitation to explore that relationship rather than a polliticised message, then it’s not too overwhelming.’’

Although when she was starting out, Heidi used to wonder why more artists didn’t use their platform to inspire and educate, Heidi says now as the mother of a two-and-a-half year old daughter, her view has changed, understanding that we are all on our own personal journeys and the range of experience is great and varied.

“I think having been an artist, having been in the position where you get approached by a wide variety of really great causes, you get approached to be ambassadors to give over your face and your quotes and your time to appear in an event or to play a song for free. I know first-hand that it’s quite a resource draining operation,’’ Heidi says.

“The organisations are well intentioned, but I saw again and again that in our band, we didn’t have the time or head space to give over much commitment because it was a one-sided thing to sign up, to promote something.”

In 2022 the Sydney-based musician’s focus is purely on growing FEAT, hoping to tour again one day, and being a present mother to her two-and-a-half year old daughter.

“To be honest, I think I was living in the world as a mother before I had an actual human under my care. You don’t need to have birthed a child to be a mother. I think what you need to do is to be a nurturer and to understand the connections between whole life forms and also the legacy that you will leave by default of just being in the earth,’’ she says.

“Everything you touch is potentially influenced by you. What are you growing in that process and are you choosing to nurture things or are you choosing to take and extract and destroy? I think it’s always a philosophy being a mother and I didn’t change that feeling once I had one. I was ahead of the child. In fact, my daughter just reinforced that view and gave me a little bundle of giggles to play with.”

Green + Simple is a proud media partner of the Environmental Music Prize. Finalists of the inaugural initiative will be announced in April. You can follow its journey and learn about inspiring songs and artists here.