Podcaster and writer, Marlee Silva advocates for facilitating all-important conversations between between Indigenous and non-Indigenous Australians

The activists to watch in 2021

Change-makers to inspire us all

In partnership with Modibodi

It’s 2021; we’ve said goodbye to the strangest year in living memory and we are ready for a clean slate. This year one of our goals at G+S is to continue to shine a light on the amazing people in our community doing inspiring things to help fight climate change. From activists, to scientists, celebrities and everyone in between. So we thought what better way to kick start the year than to partner with one of our favourite brands of 2020 (that’s you Modibodi) and chat to three change-making eco warriors, showcasing how much impact we can all have as individuals. No action is too small, because truly the greatest change you can make is to start. 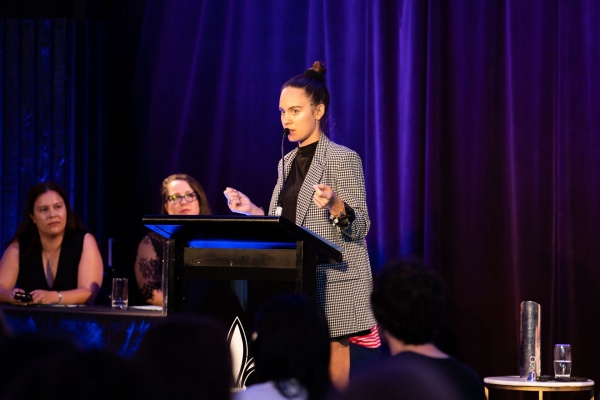 She has shone a bright light on the disconnect between Indigenous and non-Indigenous Australia but writer, podcaster and change-maker Marlee Silva tries to avoid the word activist. For the Gamilaroi and Dunghutti woman it’s a word she feels is used too liberally, instead she calls herself a writer with a lived experience she wants to share.

After being catapulted into our living rooms on January 26, 2020 via her first live cross with NITV, Marlee went on to introduce the ABC’s Q&A in March which was a discussion around Australia’s identity. Host Hamish McDonald was so impressed he went on to joke she would be putting him out of a job in the not too distant future.

Like many of us, 2020 was a tumultuous year for Marlee, she shut down her Instagram account Tiddas 4 Tiddas, which at its height, had 70,000 followers, following a series of personal attacks on herself and her family. But what she learned during that time was it’s OK to say no, that life is too short not to do the things that bring you joy.

“I am very clear to explain I don’t represent more than myself. My role is being able to point at the things that are going on, one of the big hurdles facing my community is the meeting place between Indigenous and non-Indigenous Australia,’’ she says.

“All of Australia needs to see the Indigenous incarceration rates, our Mob’s shorter life expectancy and the suicide rates. That is what is important to me.’’

When Marlee shut down Tiddas 4 Tiddas she also took a break from social media, she says it was a time of reflection and one of the biggest realisations she had was her desire to work only with brands she believed in. Which is why, of all the offers she has been receiving she decided to make her first post and first partnership with the sustainable period and leak-proof undies brand, Modibodi.

“They were a winning combo for me, celebrating women and how we talk about ourselves and our body; and caring for the environment,’’ she says.

Marlee says at its heart, Indigenous culture is dedicated to sustainability and that non-Indigenous Australians have a lot to learn from our First Nation’s people.

“We are a sustainable culture and the pursuit of wanting to preserve the beauty of our resilience, is essentially a desire of sustainability,’’ Marlee says.

“I think about it in the realities of my life, caring for Country and treading lightly on Country. It was front of mind during the fires last year and of the silver linings was the acknowledgement of how black fellas have dealt with fires for so long.” 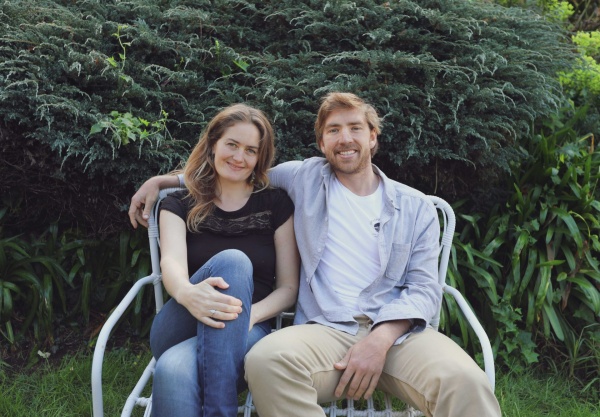 From working on remote islands in the pacific to the sub-antarctic to Western Australia’s Ningaloo Reef, Marine Biologist and Conservation Ecologist, Sacha Guggenheimer and Thomas Hiney, have seen it all when it comes to issues affecting our oceans. Yet one of the  most eye opening experiences for the couple came just over four years ago when they stumbled across a mountain of plastic on an uninhabited beach while working in the Seychelles.

“We were just greeted by a high-tide line full of flip flops, toothbrushes and lighters,” recalls Thomas of the island, Cosmoledo. “It was devastating, especially as in the water we hadn’t seen much litter unlike some parts of Indonesia where you surf through plastic trash.”

So impactful was the experience, that it eventually led the environmentalists to create their reef-friendly, non-toxic, vegan, cruelty and plastic-free sunscreen, Sunbutter Skincare.

IF YOU BUILD IT…

Like many start-ups, Sunbutter was born out of necessity for Sacha and Thomas after they found themselves in the water for up to eight hours a day on whale shark boats on the Ningaloo Reef. After needing sunscreen that was reef-friendly, and not wanting to contribute to more plastic waste, they initially began formulating their own sunscreen in their kitchen, testing it on themselves. “We figured if we get burnt that’s OK we’re trying to do something for the ocean,” Sacha recalls.

And work it did, after landing on a formulation they were happy with the couple then “paid a fortune” to have it independently tested (it came through with an SPF rating of 25+), and from there they say it wasn’t long before friends and colleagues on other charter boats wanted a piece of the magic too.

“We started getting to the point where demand was so high that we began to look for a manufacturing partner,” Thomas says adding that process took two years to complete.

“It was ballsy. We’re still taking risks,” says Sacha adding they funded their environmentally-friendly start-up using the savings they’d initially put away for a home. “When you jump things come together and it’s scary but it’s so worth it.”

Thomas and Sacha believe the power of small change can make a huge difference when it comes to issues such as ocean preservation and climate change. They say setting  yourself up for success comes in the form of manageable and habit-forming actions.

“For the people who aren’t remotely this way (environmentally) inclined, it is massively overwhelming,” Thomas says.

“Just set yourself a simple task like remembering your coffee cup. Then maybe next week try to remember your water bottle, then leave a reusable bag in the car. That really forms habits and it has a positive influence on those around you.”

“As you align with what you want to see in the world, that feeds a really positive feeling inside you,” Sacha adds.

“You can grow that feeling more and more with your habits and routines by having a lesser impact on the planet.” The couple also believe making charitable donations  – no matter how small – is a simple way anyone can make a difference. 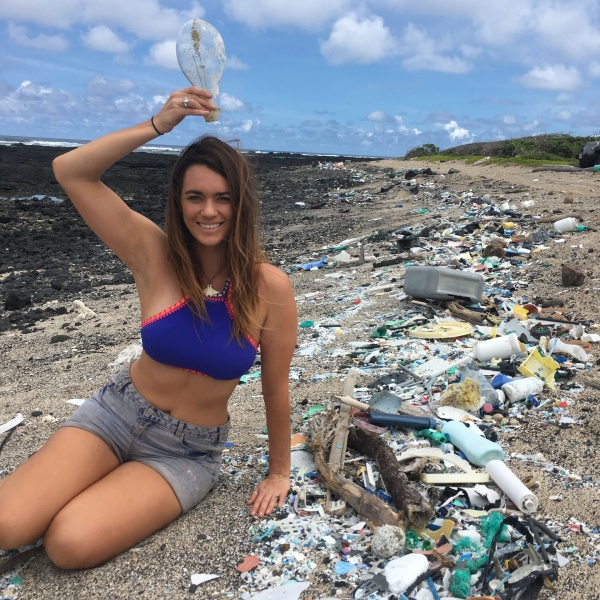 Laura Wells will look at you sideways, give a little wink and immediately make you feel like you’ve known her for years. She’s a model with degrees in law and marine science, is fiercely passionate about environmental conservation, and it’s her childhood spent in Sydney’s Cronulla exploring its beaches that she says had the biggest impact on her activist outlook today.

As a science communicator and climate activist, she loves nothing more than educating her followers on issues she’s passionate about. She has top-shelf advice for carrying all-important conversations with those who don’t believe we have a real problem on our hands when it comes to climate change.

“Try and talk to them politely, friendly and curiously,” she says. “Ask them ‘why’ they think a certain way and ‘where’ they get their information from. And then understand what’s important to them and frame a conversation around that and climate. Once you know this you can talk to them from this point of view and how climate change will affect them.”

Like many of us, 2020 was also a year of challenge for Laura, who spends much of her time travelling for work. She says last year not only forced her to slow down but also taught her that it’s OK to take a step back and let go of expectations.

“Nothing in 2020 was certain or predictable. I learnt that I love exploring my own backyard and I reconfirmed that being outside and exploring nature is something that makes me very happy,” Laura says.

She believes while COVID did put a bit of a ‘spanner in the works’ when it comes to the single use plastics and the momentum created by the 2019 climate strikes, it also brought attention to how far many of us had come in our daily habits to help make a difference.

“I feel the conversations and education regarding climate has continued throughout the pandemic,” she says.

“The fact that even though emissions dropped due to travel restrictions (but will steeply rise again once the pandemic disintegrates) shows us just how many activities in everyday life accumulates to the total emissions. And that it’s not just aviation as a big player, because in actual fact, it’s not overly huge.”

Laura – like us and our favourite activists – is also firmly in the camp of small change, big impact.

“Making a difference can be as easy as changing your bank or superannuation account to an ethical company or can be as big as you donating your time or changing your job,” Laura says. “But it all starts with education.”

Her advice is to read up on credible news sites or follow people on social media who offer tangible solutions that foster positive change. “Have conversations with people who are actually invested in wanting to make a change,” she says.

Trying your best to avoid single-use plastic – including period products – is also one of the simplest things anyone can do to reduce your environmental footprint.

“I use menstrual cups and also Modibodi underwear, and they reduce so much waste and save me money,” says Laura. “Around 11 billion disposable menstrual items go to landfill every year so knowing I’m not adding to that and are using products healthier for my body is a win-win!”

Modibodi was founded to help people to better manage their periods and incontinence without the need for disposable pads, tampons or liners. It’s a more comfortable solution that’s better for bodies and the environment. The average person uses 11,000 disposable menstrual products in their lifetime that then end up in landfill and take 500-800 years to break down.

Related; Why Stephanie Gilmore is the original conservationist