Why I made the switch to cloth nappies

And how it’s not as time consuming as you think

Having used disposable nappies with my first two babies, I’d felt a rising sense of guilt over sending mountains of disposables to landfill. But each time I ventured into the vast unknown of the ‘modern cloth nappy’ world, I’d left empty handed and confused by terminology and too much choice. After the birth of my third, that feeling of guilt became more of panic at how much waste was being created. When I spotted a local cloth nappy business at my Sunday farmers market, I decided it was a sign that it was now or never, I needed to make the switch.

So undecided was I at first, I literally hovered at the front of that little stall, half in and half out of the decision. But with the evidence and reasons to make the change quickly stacking up around me, I could think of no other reason not to do it, other than… it just seems like so much work. And, like most parents, I’m busy, really busy. And although it might be easily to logically see that reusables are the right environmental choice, as a time-poor parent it’s hard to commit to a choice that promises more work by way of yet another daily load of washing.

But given that these non-biodegradable landfill items are estimated to take up to 500 years to break down, and the fact that each child will use upwards of 5000 nappies before toilet training age, it was starting to feel more like an obligation to the children wearing all of these disposables, to not contribute to the environmental degradation of the planet that is theirs for the future.

Not just that, but swapping the disposables for reusables is also estimated to save parents in the vicinity of $5000 for each child, and after several years of buying disposables, the nappy-buying fatigue was real.The added fact that bamboo cloth nappies are made from a renewable source and also cut down on baby’s chemical exposure, made me seriously question why I had avoided doing this for so long.

I’m not in the business of making other parents feel guilty about their choices (and there is a whole world of opportunity for judgement and guilt within this debate), but if you too have been tossing around the idea of going reusable or if confusion or lack of research time has been holding you back too, let us help you simplify things, and get on with the business of cutting down on nappy waste.

What are modern cloth nappies?

Modern cloth nappies come in a whole range of different styles and variations, as well as cute colours and patterns. Confusion around terminology for me came from the names- all in one, 3-in-1, 2-in-one. But put simply, most cloth nappies consist of an outer shell, an absorbent insert and a flushable, biodegradable bamboo liner, to catch solids.

Many cloth nappies are produced from bamboo, which is naturally anti-bacterial, highly absorbent and soft on baby’s skin, as well as a sustainable source. 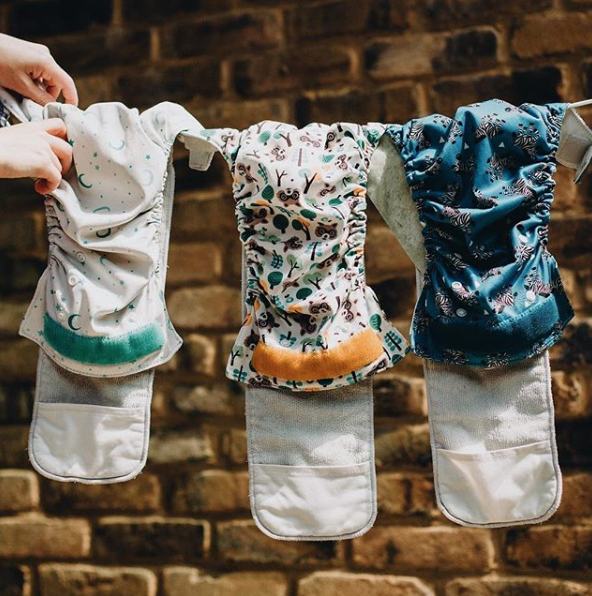 Of course, reusables are not as easy as a disposable. But, if you’re knowledge of the topic consists of stories from generations past (as mine did), about the endless chores of scraping, soaking and folding cloth nappies, then I can promise that you will be pleasantly surprised by the modern versions of the cloth nappy.

So, is it really that much more work? Before making the switch, my feeling was that yes, it would be more work, but that it was a necessary environmental choice, regardless. And going in with that opinion, I’m happy to report that it has been much easier than anticipated. Yes, there is more washing. But considering that washing is already a regularly agenda item for anyone with children, it’s really not that much additional time or effort- I’d estimate the time investment is probably less than 10 minutes a day.

Used nappies are rinsed quickly and then popped into a dry nappy bucket, where they wait to be washed within 1-2 days. Soiled nappies are only slightly trickier; biodegradable bamboo liners take the brunt of the soiling, and are popped straight into the toilet to be flushed. Limiting washing time to one or two days at a maximum helps to keep bacteria at bay and avoid staining, while line-drying the covers and inserts harnesses the sun’s natural bleaching power.

But do they actually work?

Yes, they really do! You can’t avoid it; nappies need to actually do the job. While disposables are pretty hard to beat in the absorbency stakes, that absorbency comes via the use of some pretty heavy chemicals. The bamboo fibers of the cloth nappy are super absorbent, gentle on skin, contain no chemicals and require only a small amount of plant-based washing liquid to clean. In fact, soaking and bleaching are actively discouraged, and line drying in the sun produces the best results, naturally.

I’ve found that cloth nappies need to be changed slightly more regularly (five to seven nappy changes a day is the suggested rate for a baby under 12 months). But with the range of inserts available (which vary in thickness and absorbency), it’s only a matter of experimentation with different combinations of inserts to reach the right product for your baby’s needs. 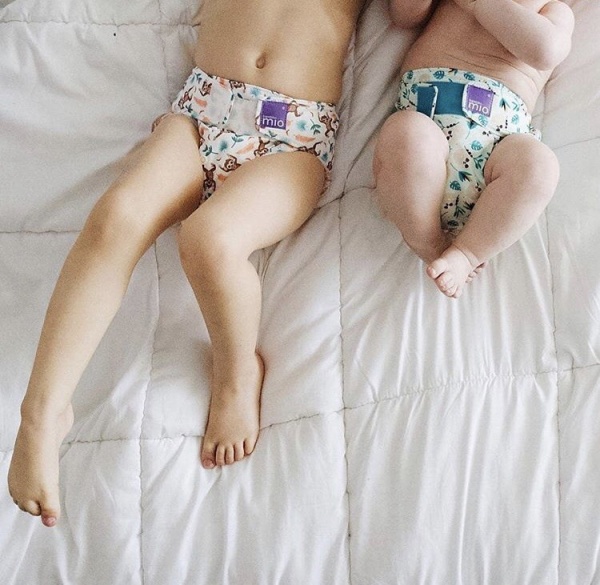 But what about the environmental impact of more water use?

Yes, you will use more water in your home. How much is difficult to quantify, but you are likely adding another small washing load of water every second day to your current usage. However, the production of single-use disposable nappies requires an enormous amount of water and energy to produce, and evidence has shown that the most energy and water-efficient nappy system is the home-washed reusable cloth nappy (as opposed to disposables and commercially-washed reusables).

Of course, the environmental benefits go beyond water use. It is estimated that around 800 million disposable nappies end up in Australian landfill every year, with the plastics taking up to 500 years to break down. As these nappies break down, the organic materials from soiled nappies release the greenhouse gas methane, which is 21 times more potent than carbon dioxide. The wider implications of disposable nappies on non-renewable energy use, global warming and climate change are enormous.

It doesn’t have to be all or nothing. Just do what you can. Maybe you can manage one cloth nappy a day, that’s saving one nappy a day from landfill, but hundreds over time. Or commit to using a combination of cloth and disposable in a pattern that suits your family. Or maybe you’re ready to go fully reusable. Whichever way, every little bit counts.

If you are still undecided, just start small. Most brands offer trial or starter kits with the basic essentials. I started with a basic start-up kit; six reusable cloth nappies, twelve cloth inserts (in various absorbencies) and some bamboo liners. This is enough to get you started and test out whether this is a viable path for you. Some Australian states even offer a cloth nappy library,for parents to trial before investing, for a small fee.

You’ll probably need anywhere from 18-24 nappies to use cloth full-time, depending on how often your baby needs changing and how often you wash. But you can build up to this level slowly. I’ve spread out the cost by adding nappies in small bundles of 3-6 with the same regularity that I was previously buying disposables. Of course, you can save more by buying a large bundle from the outset. Either way, you’ll be doing your bit for the common good.

Megan is a freelance journalist and mother of three children.